The 911 service as it exists today.

For the past seven years, an online service known as 911 has sold access to hundreds of thousands of Microsoft Windows computers daily, allowing customers to route their Internet traffic through PCs in virtually any country or city around the globe — but predominantly in the United States. 911 says its network is made up entirely of users who voluntarily install its “free VPN” software. But new research shows the proxy service has a long history of purchasing installations via shady “pay-per-install” affiliate marketing schemes, some of which 911 operated on its own.

911[.]re is one of the original “residential proxy” networks, which allow someone to rent a residential IP address to use as a relay for his/her Internet communications, providing anonymity and the advantage of being perceived as a residential user surfing the web.

From a website’s perspective, the IP traffic of a residential proxy network user appears to originate from the rented residential IP address, not from the proxy service customer. These services can be used in a legitimate manner for several business purposes — such as price comparisons or sales intelligence — but they are massively abused for hiding cybercrime activity because they can make it difficult to trace malicious traffic to its original source.

Residential proxy services are often marketed to people seeking the ability to evade country-specific blocking by the major movie and media streaming providers. But some of them — like 911 — build their networks in part by offering “free VPN” or “free proxy” services that are powered by software which turns the user’s PC into a traffic relay for other users. In this scenario, users indeed get to use a free VPN service, but they are often unaware that doing so will turn their computer into a proxy that lets others use their Internet address to transact online. 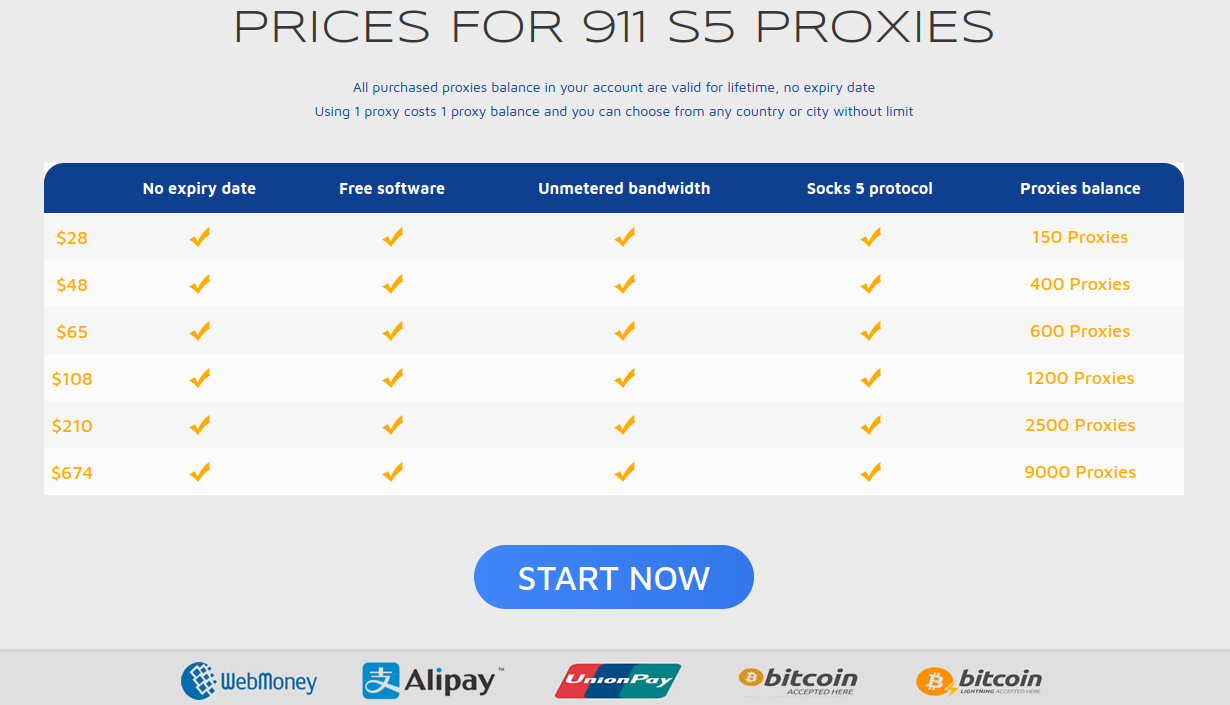 The current prices for 911’s proxies.

Researchers at the University of Sherbrooke in Canada recently published an analysis of 911, and found there were roughly 120,000 PCs for rent via the service, with the largest number of them located in the United States.

“The 911[.]re network uses at least two free VPN services to lure its users to install a malware-like software that achieves persistence on the user’s computer,” the researchers wrote. “During the research we identified two free VPN services that [use] a subterfuge to lure users to install software that looks legitimate but makes them part of the network. These two software are currently unknown to most if not all antivirus companies.”

A depiction of the Proxygate service. Image: University of Sherbrooke.

Highlighting the risk that 911 nodes could pose to internal corporate networks, they observed that “the infection of a node enables the 911.re user to access shared resources on the network such as local intranet portals or other services.” 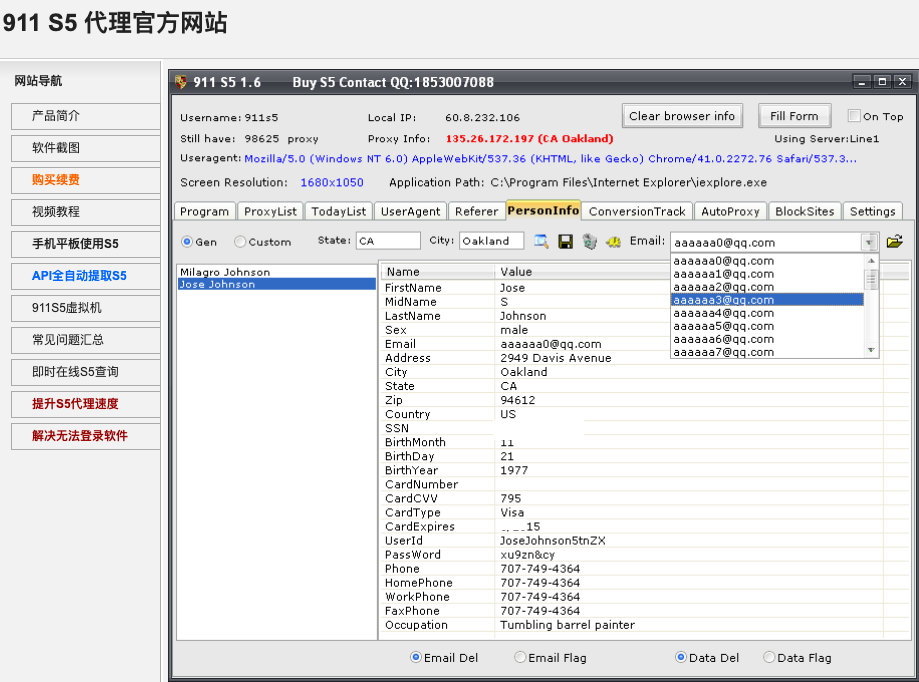 The 911 user interface, as it existed when the service first launched in 2016.

A review of the clues left behind by 911’s early days on the Internet paint a more complete picture of this long-running proxy network. The domain names used by 911 over the years have a few common elements in their original WHOIS registration records, including the address ustraffic@qq.com and a Yunhe Wang from Beijing.

A cached copy of flashupdate[.]net available at the Wayback Machine shows that in 2016 this domain was used for the “ExE Bucks” affiliate program, a pay-per-install business which catered to people already running large collections of hacked computers or compromised websites. Affiliates were paid a set amount for each installation of the software, with higher commissions for installs in more desirable nations, particularly Europe, Canada and the United States.

A cached copy of flashupdate[.]net circa 2016, which shows it was the home of a pay-per-install affiliate program that incentivized the silent installation of its software. “FUD” in the ad above refers to software and download links that are “Fully UnDetectable” as suspicious or malicious by all antivirus software.

Another domain tied to the ustraffic@qq.com email in 2016 was ExeClean[.]net, a service that advertised to cybercriminals seeking to obfuscate their malicious software so that it goes undetected by all or at least most of the major antivirus products on the market. 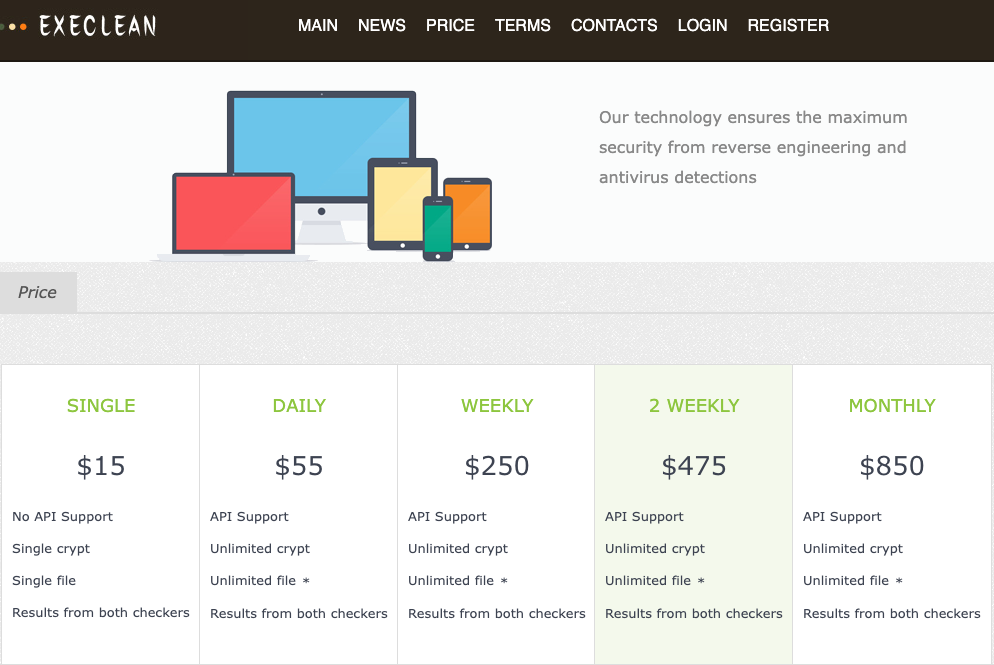 The Exe Clean service made malware look like goodware to antivirus products.

Yet another domain connected to the ustraffic email is p2pshare[.]net, which advertised “free unlimited internet file-sharing platform” for those who agreed to install their software. 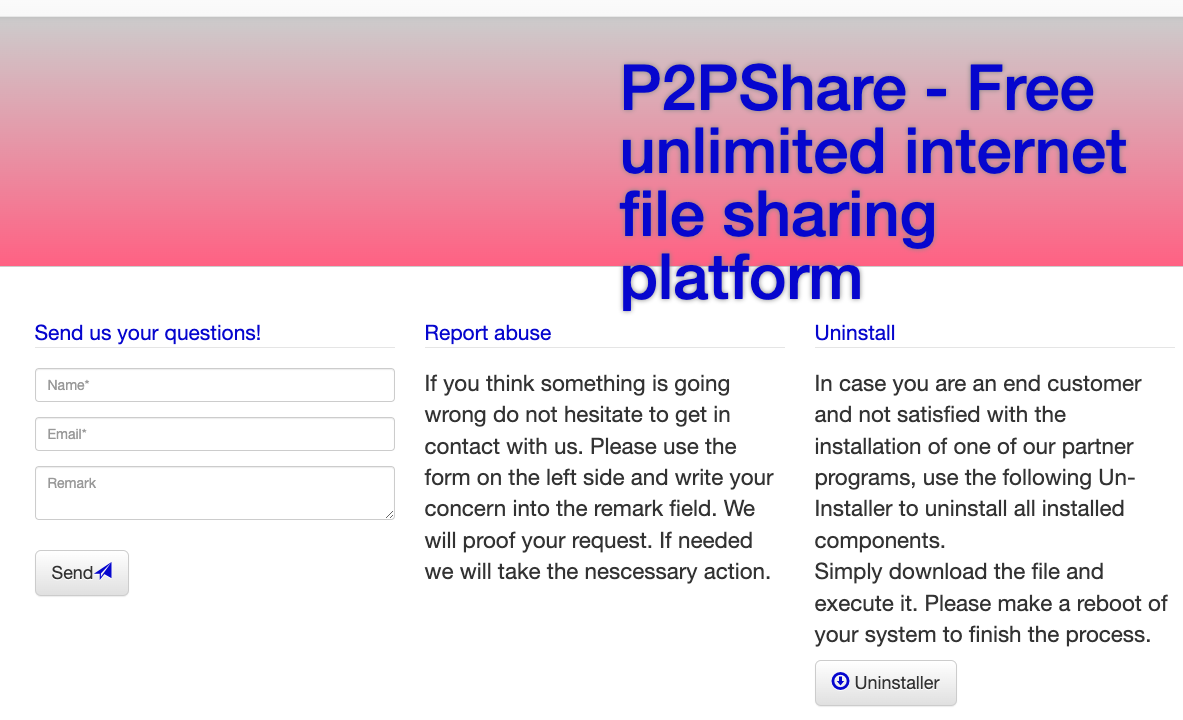 p2pshare.net, which bundled 911 proxy with an application that promised access to free unlimited internet file-sharing.

The earliest version of the 911 website available from the Wayback Machine is from 2016. A sister service called proxygate[.]net launched roughly a year prior to 911 as a “free” public test of the budding new residential proxy service. “Basically using clients to route for everyone,” was how Proxygate described itself in 2016.

For more than a year after its founding, the 911 website was written entirely in Simplified Chinese. The service has only ever accepted payment via virtual currencies such as Bitcoin and Monero, as well as Alipay and China UnionPay, both payment platforms based in China.

Initially, the terms and conditions of 911’s “End User License Agreement (EULA) named a company called Wugaa Enterprises LLC, which was registered in California in 2016. Records from the California Secretary of State office show that in November 2016, Wugaa Enterprises said it was in the Internet advertising business, and had named as its CEO as one Nicolae Aurelian Mazgarean of Brasov, Romania.

A search of European VAT numbers shows the same Brasov, RO address tied to an enterprise called PPC Leads SRL (in the context of affiliate-based marketing, “PPC” generally refers to the term “pay-per-click”).

911’s EULA would later change its company name and address in 2017, to International Media Ltd. in the British Virgin Islands. That is the same information currently displayed on the 911 website.

The EULA attached to 911 software downloaded from browsingguard[.]com (tied to the same ustraffic@qq email that registered 911) references a company called Gold Click Limited. According to the UK Companies House, Gold Click Limited was registered in 2016 to a 34-year-old Yunhe Wang from Beijing City. Many of the WHOIS records for the above mentioned domains also include the name Yunhe Wang, or some variation thereof.

In a response to questions from KrebsOnSecurity, 911 said the researchers were wrong, and that 911 has nothing to do with any of the other domains mentioned above.

“We have 911 SDK link and how it works described clearly in the “Terms of use” of affiliated partners products, and we have details of how the community powered network works on our webpages,” read an email response.

“Besides that, for protecting the end users, we banned many domains’ access and blocked the vulnerable ports, e.g. spamming emails, and torrent is not possible from the 911 network,” the reply continued. “Same as scanning and many others…Accessing to the Lan network and router is also blocked. We are monitoring 911 user’s account closely, once any abnormal behavior detected, we suspend the user’s account right away.”

911 has remained one of the most popular services among denizens of the cybercrime underground for years, becoming almost shorthand for connecting to that “last mile” of cybercrime. Namely, the ability to route one’s malicious traffic through a computer that is geographically close to the consumer whose credit card they’re about to charge at some website, or whose bank account they’re about to empty.

Given the frequency with which 911 has been praised by cybercrooks on the top forums, it was odd to find the proprietors of 911 do not appear to have created any official support account for the service on any of several dozen forums reviewed by this author going back a decade. However there are two cybercriminal identities on the forums that have responded to individual 911 help requests, and who promoted the sale of 911 accounts via their handles.

Both of these identities were active on the crime forum fl.l33t[.]su between 2016 and 2019. The user “Transfer” advertised and sold access to 911 from 2016 to 2018, amid many sales threads where they advertised expensive electronics and other consumer goods that were bought online with stolen credit cards.

In a 2017 discussion on fl.l33t[.]su, the user who picked the handle “527865713” could be seen answering private messages in response to help inquiries seeking someone at 911. That identity is tied to an individual who for years advertised the ability to receive and relay large wire transfers from China.

One ad from this user in 2016 offered a “China wire service” focusing on Western Union payments, where “all transfers are accepted in China.” The service charged 20 percent of all “scam wires,” unauthorized wire transfers resulting from bank account takeovers or scams like CEO impersonation schemes. 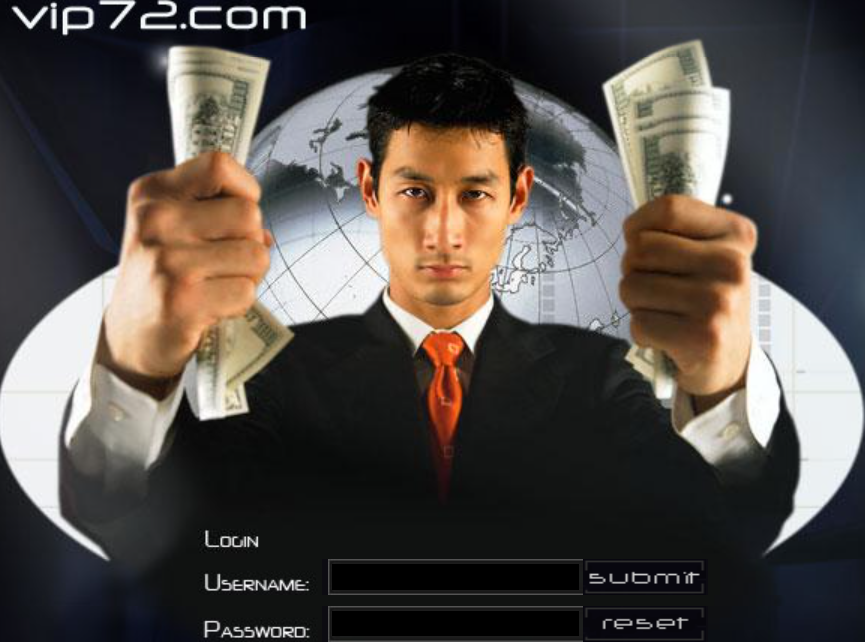 The login page for VIP72, until recently 911’s largest competitor.

That’s according to Riley Kilmer, co-founder of Spur.us — a security company that monitors anonymity services. Kilmer said 911 also gained an influx of new customers after the Jan. 2022 closure of LuxSocks, another malware-based proxy network.

“911’s user base skyrocketed after VIP72 and then LuxSocks went away,” Kilmer said. “And it’s not hard to see why. 911 and VIP72 are both Windows-based apps that operate in a similar way, where you buy private access to IPs.”

Kilmer said 911 is interesting because it appears to be based in China, while nearly all of the other major proxy networks are Russian-backed or Russian-based.

“They have two basic methods to get new IPs,” Kilmer said. “The free VPN apps, and the other is trojanized torrents. They’ll re-upload Photoshop and stuff like that so that it’s backdoored with the 911 proxy. They claim the proxy is bundled with legitimate software and that users all agree to their Terms of Service, meanwhile they can hide behind the claim that it was some affiliate who installed the software, not them.”

Kilmer said at last count, 911 had nearly 200,000 proxy nodes for sale, spanning more than 200 countries: The largest geographic concentration is the United States, where more than 42,000 proxies are currently for rent by the service.

Beware of “free” or super low-cost VPN services. Proper VPN services are not cheap to operate, so the revenue for the service has to come from somewhere. And there are countless “free” VPN services that are anything but, as we’ve seen with 911.

In general, the rule of thumb for transacting online is that if you’re not the paying customer, then you and/or your devices are probably the product that’s being sold to others. Many free VPN services will enlist users as VPN nodes for others to use, and some even offset costs by collecting and reselling data from their users.

All VPN providers claim to prioritize the privacy of their users, but many then go on to collect and store all manner of personal and financial data from those customers. Others are fairly opaque about their data collection and retention policies.

I’ve largely avoided wading into the fray about which VPN services are best, but there are so many shady and just plain bad ones out there that I’d be remiss if I didn’t mention one VPN provider whose business practices and transparency of operation consistently distinguish them from the rest. If maintaining your privacy and anonymity are primary concerns for you as a VPN user, check out Mullvad.net.

Let me make clear that KrebsOnSecurity does not have any financial or business ties to this company (for the avoidance of doubt, this post doesn’t even link to them). I mention it only because I’ve long been impressed with their candor and openness, and because Mullvad goes out of its way to discourage customers from sharing personal or financial data.

To that end, Mullvad will even accept mailed payments of cash to fund accounts, quite a rarity these days. More importantly, the service doesn’t ask users to share phone numbers, email addresses or any other personal information. Nor does it require customers to create passwords: Each subscription can be activated just by entering a Mullvad account number (woe to those who lose their account number).

I wish more companies would observe this remarkably economical security practice, which boils down to the mantra, “You don’t have to protect what you don’t collect.”